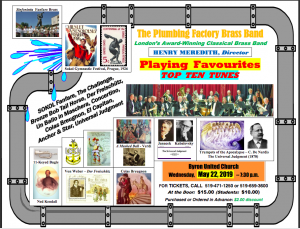 In their two dozen years of entertaining southern Ontario audiences, the Plumbing Factory Brass Band has become known for performing eclectic repertoire exemplifying all eras and styles. However, they are one of the few brass bands today specializing in music from the “Golden Age of Brass Bands” (circa 1850-1950). Their next program, on May 22nd, offers the diversity and rarity of selections audiences have come to expect when they attend a concert by the PFBB.

Titled “PLAYING FAVOURITES”, the concert presents a selection of “Top Ten Tunes”
chosen by director Henry Meredith. Only four of these have ever been performed by “The Plumbers” before. Of course, having programmed around 500 different compositions since its first concert, “Dr Hank” admits that there could easily be a Top 100 Tunes among those already performed in the band’s history, and an equal number of pieces that he would like to add to their repertoire. In reality, then, this program represents a fascinating assortment which still leaves much music to explore

Glorious brass sounds will surround the audience for the opening Sokol Fanfare from Leo Janacek’s Sinfonietta, and the “Trumpets Shall Sound” from every corner of the heavens in De Nardis’s 1878 prize-winning symphonic poem, Universal Judgment, Dr. Hank’s prime candidate for the best band composition ever written. Two more pieces present extraordinary demands for the PFBB – an appropriately named test piece, The Challenge, and the persistently presto overture to Kabalevsky’s opera Colas Breugnon. A set of mid- 19th-century band favourites includes a medley quick step based on Stephen Foster songs, two arrangements of opera excerpts, from Weber’s Der Freischütz and Verdi’s Un ballo in maschera, and an original Concertino for E-flat cornet and brass band, played on the soprano keyed bugle by director Meredith. Two Sousa marches round out the program – El Capitan (employing themes from his operetta of the same name) and Anchor and Star, featuring his longest obbligato for regimental valveless trumpets.

This entry was posted in Uncategorized. Bookmark the permalink.